If you’ve been following me, you know I recently completed a minor DIY cabinet upgrade, which I intend to share the “how-to” with you all. BUT FIRST, I wanted to share a little story with you. This will either be relatable to many, or it will solidify that I’m now dubbed #crazywhitelady.

Husband and I decided on a quiet night at home last night. We, naturally, opened a bottle of wine to drink with dinner. After we ate, we decided to take our fur son for a stroll. Fine, but there was zero chance I was going to abandon my perfectly full second (or third?) glass of wine. So, I grabbed a plastic cup, dumped said glass into plastic cup and carried on my merry way in my apropos Friday shirt (courtesy of my friend J. crew). 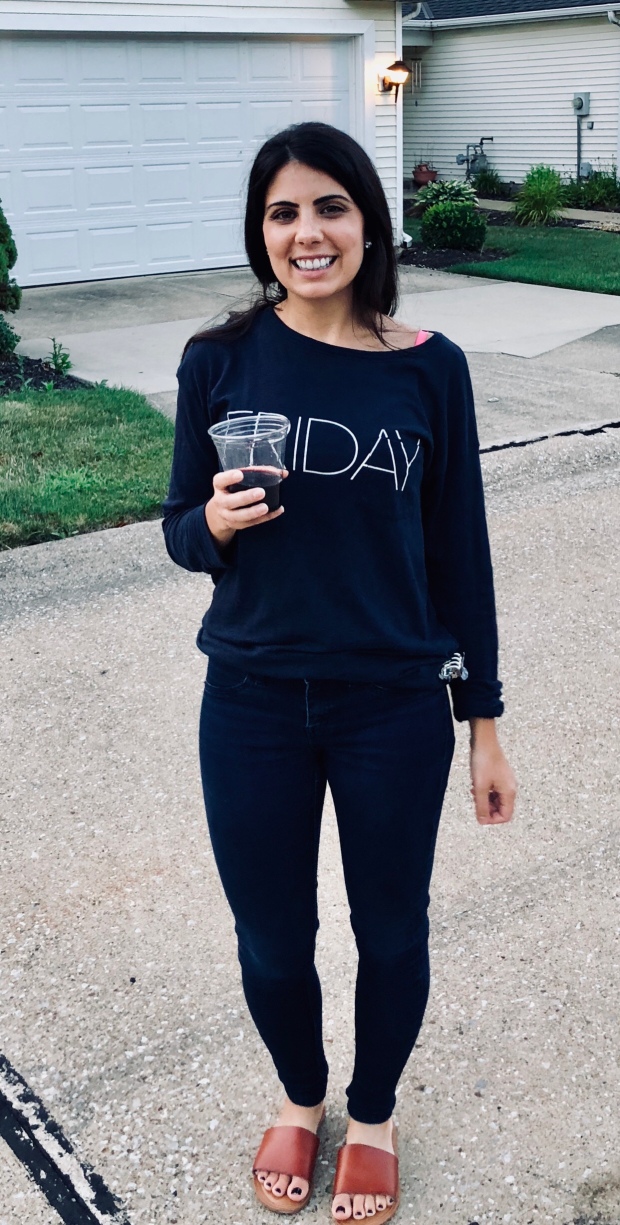 We were met with several neighbors, children playing, and a couple of brothers tossing a football while watching their 2-3 year old brother. Said toddler squealed with delight at the approach of our dog. I (buzzed) became excited and ushered the child over in the most mom voice I’m capable of producing. Theodore (dog), however, chose to display the rabid psycho portion of his personality (we really should’ve taken him to obedience school – but that’s a rant for another day), ultimately forcing the adorable tot to shake his head and run away. We continued our journey. About ten seconds into our retreat, footballer brothers snickered to each other about the “crazy white lady, drinking.”

This is a new title for me, but you know what, I’m going to embrace it.

And am I really crazy? Has no one else ever brought a “road pop” with them? Yeah, that’s what I thought.

Moving on to the DIY cabinet project.

Many of you probably already know how to paint a cabinet, but let me drop a piece a knowledge I did not know prior to this project: you do NOT need to sand to prep. I always thought sanding was step one. Wrong! All you need is a liquid deglosser!

I failed to take “good” before pictures, but you get the idea… 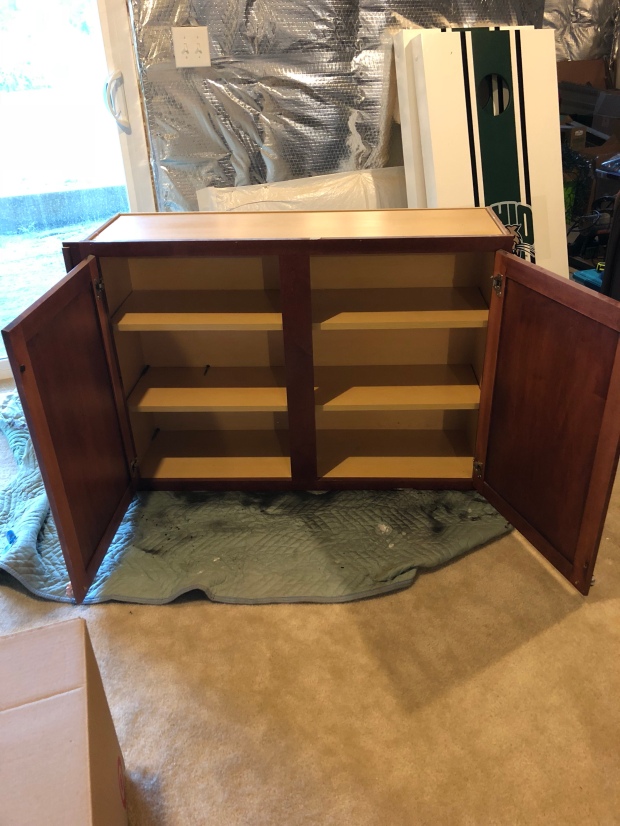 Jumping right into my process, the first step was to take the doors and existing hardware off.

Then, I wiped all surfaces down with the deglosser.

Next, I primed – which you have to do within the hour of using the deglosser, FYI. I chose an extreme bonding primer in gray. The gray tint supposedly helps the darker colors cover a tad easier than using a white primer.

After I let the primer dry, I moved on to painting the final color: Sherwin Williams Naval in a semi gloss. I will tell you, it took a solid three coats to get the coverage and color right. This project did take more time than I initially calculated. But, I can’t complain because we were gifted the cabinet for free from a remodel my dad recently completed. The cabinet style is not my first choice, but free is free and this particular box is going in my laundry room, so it’s more than sufficient.

Also, I had the crystal knobs laying around in my basement from a coffee table I refurbished a few years ago that we no longer use.

Oh, and get a good paintbrush. It does make a difference.

That’s all, friends! Talk to you soon.

View all posts by Erika's Edicts